Your browser is not supported

Your browser is too old. To use this website, please use Chrome or Firefox.

There are so many camp games out there. You may really enjoy some and you may not enjoy others. We have complied a list within Royal City Soccer Club’s office of our favourite camp games that we have played over the years. We hope you can try them and enjoy them as much as we did! 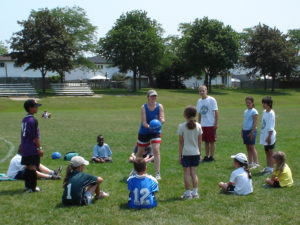 I loved playing soccer baseball! Every time the teacher told us we were going outside to the diamond, I got super excited! Not only did it involve two of my favourite sports, it allowed me to work as a team with my classmates. Cheering was the best part because everyone got involved and encouraged one another, so nobody felt left out.

My favourite camp game was called “Get it and Jet it”. You were split into teams and the counselors would yell out an object that your team had to run and find.  Once you found the object and brought it back to the counselor they would give you the next item on the list to find. This game was a blast to play because the objects got funnier as the list went on. We had to find things like a grey sock, an item that was orange or something that you could use as a musical instrument. I think this game worked so well because you worked together as a team to find these objects. No matter how many times you played the game it still could be fun because the counselors could pick anything for you to find. A big part of why I liked camp so much is that you played games that evened the playing field. No one was “the best” at get it and jet it. It made everyone be an equal contributor and was a fun way to be active.

Games that involved team work were the games that I liked playing, such as European Hand Ball. The game was fast paced, I got to play on a team, and you didn’t need to be super athletic to play this game! I remember everyone smiling every time we got to play this.

DODGEBALL!!! Dodgeball was by far the best camp game I ever played! There weren’t that many rules that I had to understand and listen to in order to play it and everyone’s energy was always really positive while playing. If you can dodge a wrench, you can dodge a ball…anyone could play!

The most memorable camp game that I played was Horses, Knights, and Cavaliers…I mean come on…You got to become a horse, a knight or a cavalier all in the same game, how cool is that?! I loved interacting with different people at camp during this game and although it was competitive, it was also really fun!

Duck, duck, goose would have to be my favourite camp game. I never wanted to be the goose and there was always so much anticipation as the “ducks” got closer and closer to me. But when I did end up being the goose there was such a thrill that I felt, trying to stand up and run around the circle, hoping I would get to sit down again!

Four corners was the best! It got to be pretty intense sometimes, but in a way that was fun for everyone. Four teams would be cheering for each other, while also guarding their cones, while also trying to knock over other cones in another corner!  Who knew that such a simple game could be so much fun and got everyone involved.

Zap! My all time favourite camp game. It’s a low key game that gets all the campers involved and there can be so many variations to this game. The best part about this game is that although you can get out, you are still entertained because it’s so fun to watch everyone else get zapped by someone else, especially if someone gets caught in the crossfire…woo!

Kick off your camp experience!